France Mosque Shooting: Man in his 80s arrested after two shot in Bayonne A former election candidate for Marine Le Pen’s far-Right National Rally has been arrested for allegedly shooting and injuring two Muslim worshippers at a mosque in Bayonne, south-western France on Monday.

The 84-year-old suspect, named locally as Claude Sinké, is also accused of trying to burn down the mosque. He was arrested at his home in Saint-Martin-de-Seignanx, near Bayonne after fleeing the scene by car.

He reportedly set a vehicle on fire before he left. Police found a gas canister and a handgun in his car.

Patrice Peyruqueou, a police union official in Bayonne, said: “The suspect threw an incendiary device at the mosque and then drove away. He was apparently trying to set fire to the mosque when two worshippers intervened and he shot them.”

One of the worshippers was hit in the chest.

The two wounded men, aged 78 and 74, were taken to hospital. They were described as being in serious but stable condition.

The suspect reportedly admitted the shootings when questioned by Bayonne police, but the motive for the attack was unclear. He was said to have no police record and was not on the radar of French intelligence agencies.

Another attack on a place of worship, we NEED to ensure our sacred buildings and its worshippers are protected. It is the duty of the management to take the right steps to safeguard the building from potential attacks. #mosquesecurity 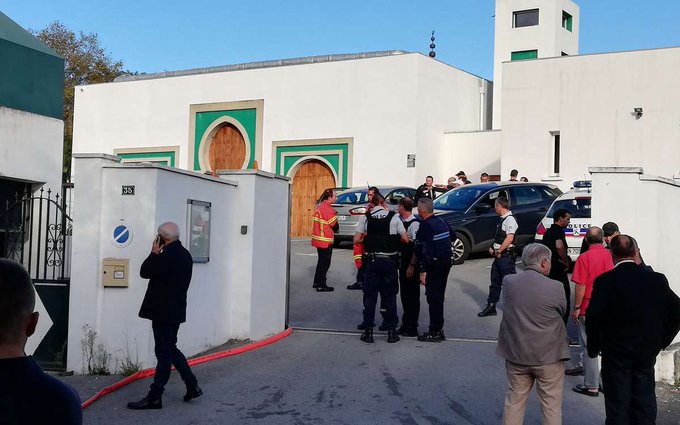 Christophe Castaner, the interior minister, expressed indignation in a tweet: “My first thoughts go to the injured and their families. Solidarity and support to the Muslim community. I realise to what extent they are shocked and frightened.”

Ms Le Pen strongly condemned the attack, which said was “contrary to all the values upheld by our movement.”

The suspect was reportedly an unsuccessful candidate for her party in regional elections in 2015. He attended a military academy in his youth.

A source close to the investigation said: “There was widespread panic at the mosque. There were a lot of people inside at the time.”

The incident follows an increase in attempts to vandalise mosques in France.

Many Muslims have been killed in Islamist attacks, such as the 2015 Paris atrocities in which 130 people died. Dozens of people were killed in an attack on two mosques in New Zealand in March.

Local prosecutors said he was likely to be charged with attempted murder. Emmanuel Macron, the French president, condemned the “odious attack” and pledged “to protect our Muslim compatriots”. France, he said, “will never tolerate hate.”