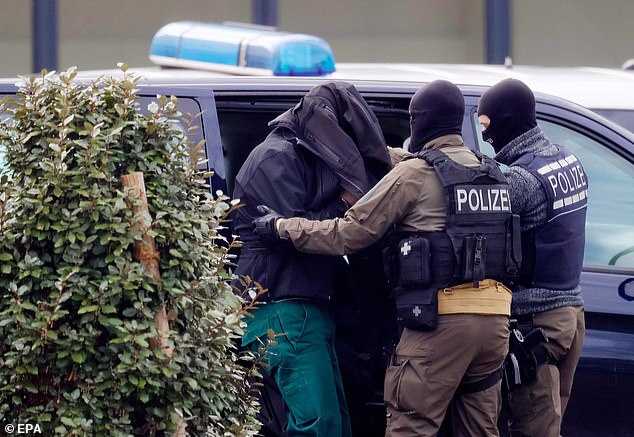 Members of a far-right group arrested in Germany were planning attacks on mosques, politicians and asylums seekers, local media report.

The 12, allegedly belonging to Der harte Kern (The Hard Core), were detained on Friday.

Another man believed to be a part of the group is still on the run, according to newspaper Welt am Sonntag.

Germany has seen a rise in support for the far right, especially in the country’s formerly-communist east.

The authorities have stepped up their crack down on the country’s underground far right following the murder of politician Walter Luebcke and an attack on a synagogue in the eastern city of Halle last year.

Four of the men, all German nationals, were arrested last week on suspicion of forming Der harte Kern; the remaining eight are suspected of providing the group with money, weapons and other support.

It is believed they have links to the Soldiers of Odin, another far-right group founded in Finland five years ago.

The alleged leader of the German group, a 53-year old known as Werner S, was known to authorities and resides in the southern city of Augsburg.

Last week he allegedly met with other members and discussed plans for ten separate attacks in the country, including massacres at mosques similar to those carried out in New Zealand last year. They reportedly hoped their actions would provoke counter-attacks and lead to a civil war.

According to the press reports, investigators were tipped off by someone who had infiltrated the group.

In subsequent raids, authorities found guns and materials that can be used to produce home-made bombs, Welt am Sonntag said.

Germany’s highest criminal court, the Federal Court of Justice, has ordered that the men be detained while the investigation continues.