Mosque Security provides security advice and support to any Mosque or Islamic centre in the UK & beyond. We offer free advice and support on
a range of issues, such as, the physical security of the Mosque (whats needed) and any training for those in leadership positions in your Mosque.

Mosque Security has been set up by Faith Associates to aid Management Committees in protecting the sacred institution. The Mosque as a institution is the central body of the Islamic community. Maintaining the Mosque’s safety and ensuring its protection is one of the most important things for a management committee.

Since the killing of Lee Rigby in 2013, we have seen the steady rise in anti-Muslim sentiment and increases in targeted attacks on Mosques across the UK. Just recently we saw the killings of 50 innocent worship goers in  Christchurch, New Zealand which has resulted in many mosque attacks in the UK.

Due to the prominence of Mosques and Islamic Centres within communities, they are facing the challenge of rising Islamophobia and risk being the victim of hate crimes.

In order to try and mitigate the harm caused by hate crime and to give Mosques and Islamic Centres the tools to stay prepared to deal with an issue, Mosque security provides advice, training and support to ensure institutions and its congregations are protected. Breakdown of the training provided

This service provides a comprehensive on-site inspection to thoroughly examine your premises that host the services your institution provides. Below is a breakdown of the Mosque security training:

Our Mosque Security Training in Media

GOV.UK – The Home Office will be supporting Faith Associates to provide security training and advice to Muslim places of worship in preparation for the Islamic holy month. 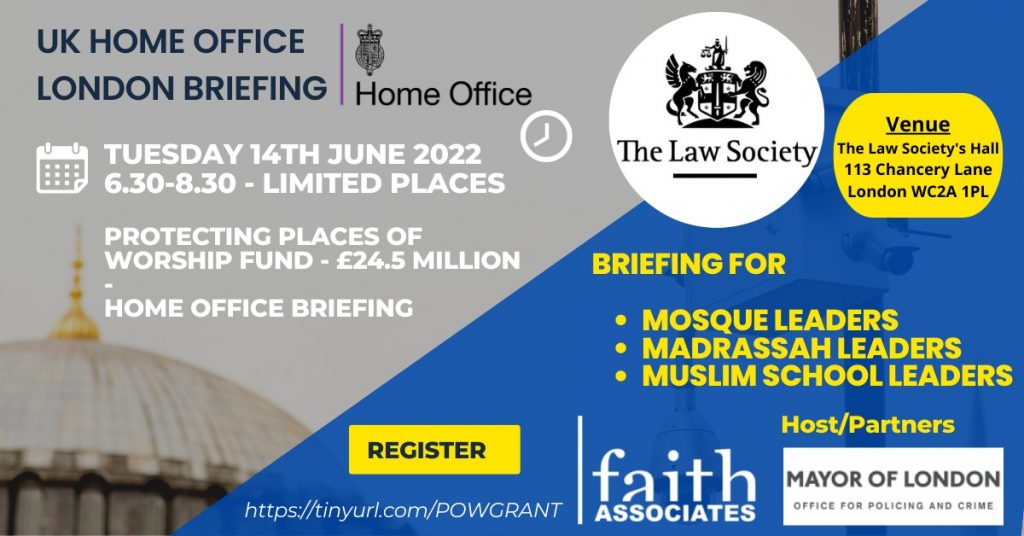 Mosques and Muslim faith schools have been given access to £24.5 million for security measures to protect their places of worship and schools as per an […]

Our deepest thoughts and prayers are with Zara Aleena's family and the local #Ilford community. We urge anyone who maybe able to assist to contact the police incident room 📞 0208 345 3715

A woman found with serious head injuries in #Ilford #Redbridge this morning has died in hospital. Her family are aware.

A murder investigation has been launched. Do you have information that could help detectives?

Leaders from the House of Peace Mosque in #Langwarrin, #Australia, say they are willing to forgive a group of young men who were caught on security camera breaking into the mosque, causing thousands of dollars worth of damage.

Daughter of @FPMosque terror attack victim, Ruzina Akhtar, said that 'as a #Muslimwoman' she wanted everyone 'to voice any #Islamophobic behaviour as it still exists so it is tackled right away' when she paid a moving tribute to her father

#FinsburyPark @FPMosque is paying tribute to the victims of the 2017 Islamophobic terrorist attack that occurred outside its grounds.

5 years since the @FPMosque terror attack and #MosqueSecurity continues to be of vital importance across the UK.

#Mosques & Muslim faith schools can apply for the Places of Worship Protective Security Fund to strengthen their security measures: https://mosquesecurity.com/2022/05/25/important-update-places-of-worship-protective-security-fund-now-open-for-applications/

Five years after the terror attack outside a Finsbury Park mosque, our thoughts remain with the families of those affected.

Leaders from the House of Peace Mosque in #langwarrin, #australia, say they are willing to forgive a group of young men who were caught on security camera breaking into the mosque, causing thousands of dollars worth of damage.#mosquesecurity ... See MoreSee Less

‘That was really painful’: Langwarrin mosque leaders count cost after vandals break in

A group of vandals has been caught on security video damaging a mosque near Frankston.
View on Facebook
· Share

Daughter of Finsbury Park Mosque terror attack victim, Ruzina Akhtar, said that 'as a #muslimwoman' she wanted everyone 'to voice any #Islamophobic behaviour as it still exists so it is tackled right away' when she paid a moving tribute to her father.#mosquesecurityThe daughter of a Muslim worshipper killed outside Finsbury Park Mosque in a racist terror attack five years ago remembered Makram Ali as 'one of the most gentle human beings you could have met' ... See MoreSee Less

MOPAC, co-hosts of the briefing event, delivering a presentation on the places of worship security funding scheme for Places of worship and faith schools. Dialogue & seminars were held between Mosque Leadership & School management and funders about the scheme. #SecurityFund Mosque Security ... See MoreSee Less